Don’t give emails a chance: Experiences from 5 years without emails

We are celebrating five years of email-less working. Back to the roots with pen and paper? Not at all, because as a group of IT companies we work purely digitally and as efficiently and transparently as possible. When the medium of email stood in the way of our growth, we consistently removed it. But why did we do that?

Emails do not have a good reputation. And rightly so. A 1982 study (1) predicted a highly desirable positive impact of electronic communication on personal productivity and managerial efficiency. In the same year, email was born in its current form as “ARPA Internet Text Messages” (2).

With increasing diffusion from the 90s onwards, the assessment became more differentiated. As early as 2000, a meta-study (3) recognised information overload as one of the downsides:

“Both perceptions and the actual effects of information overload have been exacerbated by the rapid advances made in information and communication technology, although it is not clear cut as to whether the Internet has worsened or improved the situation.”

McKinsey (4) was more specific in 2012. According to the report, only 39% of work output is put into working on the actual tasks. 61% of work output goes into coordinating work, and 28% alone is attributed to reading and answering emails. 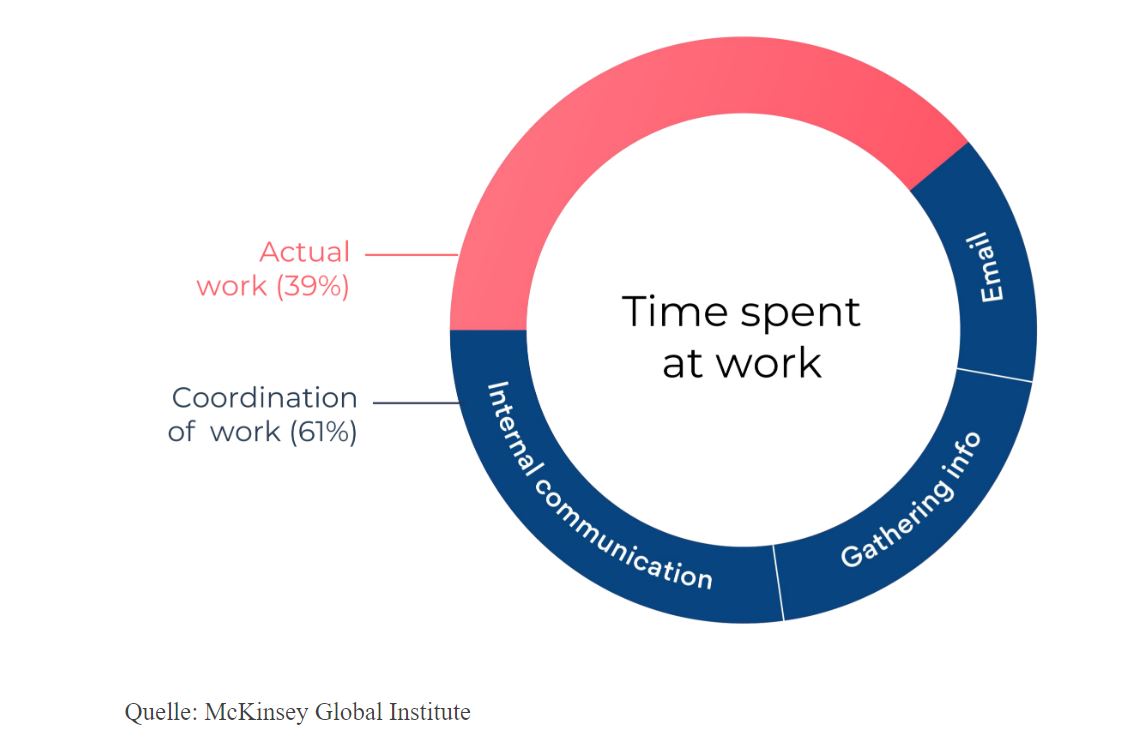 Bain Research underlines the massive development of collaboration possibilities through email and subsequent tools, but also recognises stagnating productivity. Unclear planning, goal setting and accountability are cited as the main reasons for the gap.

When our companies began to grow more strongly a few years ago, we quickly reached the limits of e-mail. On the surface, productivity may have decreased, but in the end, it was quality that declined. For a people business, which defines itself by the highest possible level of quality, this is a bad idea.

It is always difficult to control quality in growth phases and generally in times of upheaval. We realised that the lack of transparency and accountability – as warned against by Bain – were no longer manageable with the medium of e-mail. Sometimes the task simply got lost.

Work management instead of email

It’s not a phrase, we actually did abolish emails five years ago. Emails are no longer exchanged within and between the companies of the group. Colleagues who are not in direct contact with customers or suppliers sometimes don’t even know that they still have an email address at all.

Instead of emails, we rely on a work management tool from the cloud, which is strategically positioned as a central collaboration hub. The coverage of users and tasks is almost 100%. Through the system, we create a high level of transparency and at the same time clear responsibilities. By mapping our agile processes, we not only ensure a high level of quality, but also work very efficiently.

The strategic positioning of a work management tool as an email replacement has supported our rapid growth over the last five years and partly made it possible in the first place. In addition to organic growth, we were able to master several acquisitions in a short amount of time and quickly integrate the new colleagues across various locations. Are you still writing emails?